By the time you are ready to sit behind the wheel of a car, you have likely seen hundreds, if not thousands, of road signs, traffic signals, pavement markings and curbs painted in different colors. You probably already know the meaning of stop signs and stoplights, as most of us learned those out of childhood curiosity when driving around town with our parents. 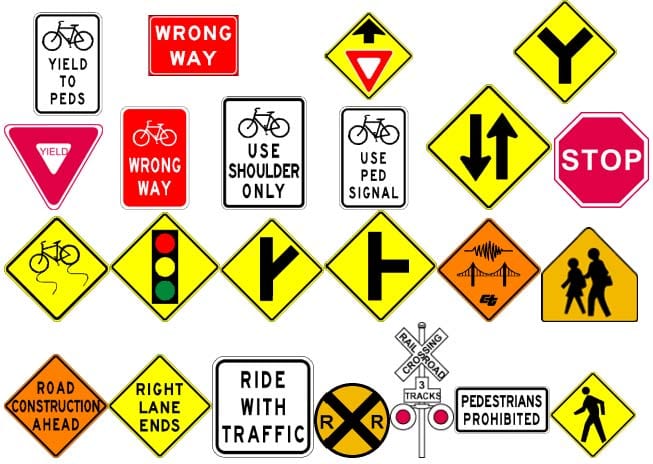 As a passenger, though, you didn’t have to worry about what those signs meant, but that’s all going to change now.  As a safe and responsible driver, it is your job to know what all these signs and markings mean, and to follow the instructions that they give.

By the end of this module, in addition to clearly understanding signs, signals and markings painted on roadways and curbs,  you’ll have a good working knowledge of the basic rules and laws associated with how roadways are laid out, and how signs and various other roadside notifications provide drivers with important information.

In the earliest days of the car, there was little need for intricate systems to control traffic. You cranked up the car, hopped back in and travelled down a rough, unpaved road. You probably didn’t see any other drivers on the road. Early drivers were automobile pioneers. 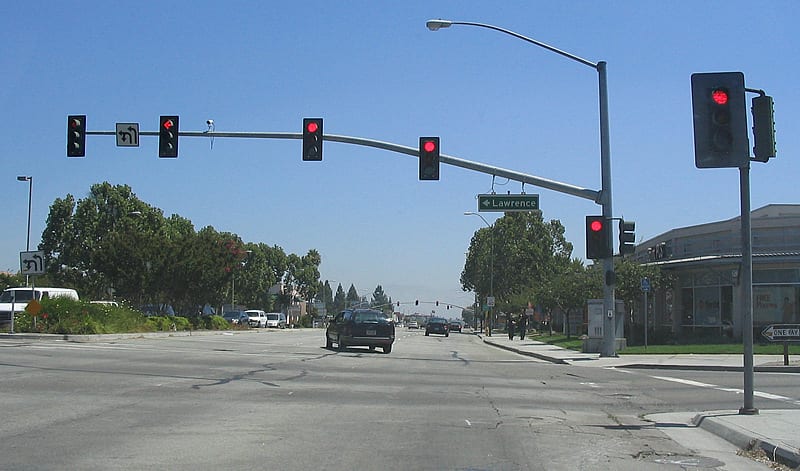 But with some 240 million cars on the road in the U.S. today, times have changed.  Nevada, just like other states, uses traffic controls to regulate where, when and how cars travel on public roads. It’s impossible to have state transportation workers guiding traffic on every street corner, so over the years, cities and states have developed a network of signs, signals, pavement markings, and curb markings to guide drivers and help make them aware of each other’s presence and movements. Each sign, signal or marking serves one or more of these purposes:

This is all well and good, but traffic signs are ineffective if people don’t know what they mean. Drivers applying for their first license must prove that they know what the road signs and signals mean. Safe and responsible drivers are always scanning the road for traffic signs and signals—not just for road hazards— while they’re driving and when they reach an intersection. Many intersections have traffic signals or signs to regulate traffic that passes through the intersection, such as No Left Turn or No U-Turn signs.  Safe and responsible drivers notice and follow these signs, but not all drivers are safe and responsible, so it’s important to slow down and be careful whenever you go through an intersection.  You should always keep in mind that the majority of crashes happen at intersections.

Traffic signals are placed at intersec­tions to keep traf­fic moving and to avoid traffic collisions. Drivers, pedestri­ans, and bicycle riders must obey these signals, ex­cept when a police officer is directing traffic. If traffic signals are out of or­der, treat the light as if it were a 4-way stop sign. Some of the more common control lights and their meanings include:

While we rely on signals to tell us what to do, you should also be aware that the lack of a signal also provides indication of what you can and cannot do. The most common example of this is a broken traffic signal. Broken traffic lights should be treated like a four-way stop. This means you (and all other drivers) must stop completely, and then wait for vehicles within the intersection and for those who reached the intersection before you did to go first.. Don’t try and beat other drivers through the intersection. Go when it is your turn and the way is clear.

Flashing lights tell you to stop or yield, depending on the color of the light.

An arrow light is used just like the solid color circular lights. It controls the direction of traffic.

In order to keep rush hour traffic moving smoothly, some roads have signals that control the use and direction of each lane in that road at different times during the day. These signals are positioned above the lanes. As we just noted, a green arrow pointing downward is an example of a lane control signal. It tells you it’s OK to travel in the direction you are going in that particular lane. Other signals include:

Traffic control indicators aren’t only at eye-level, nor are they all in the form of signs. Many important safety controls are painted on the roads and curbs to help direct drivers and control traffic flow. You must know what the different lines and colors mean, and obey them as you would traffic signs or signals.

White and yellow lines are used along pavement edges and between lanes to keep vehicles in line. These lines may be solid or broken (long dashes), single or double. Unless you are turning, exiting a high­way, or changing lanes, always stay be­tween the lines marking your lane.

Yellow lines indicate that traffic on this road is flowing in opposite directions. Single yellow lines may also mark the left edge of the pavement on divided highways and one-way streets. When driving on roads with a yellow centerline, you must take care to stay to the right of this line and on your side of the road. There are some exceptions to this rule, however, which we explain below:

White lines indicate that traffic is flowing in the same direction. These lines are also mark the right edge of a road and crosswalks. The most common types of white line markings are: 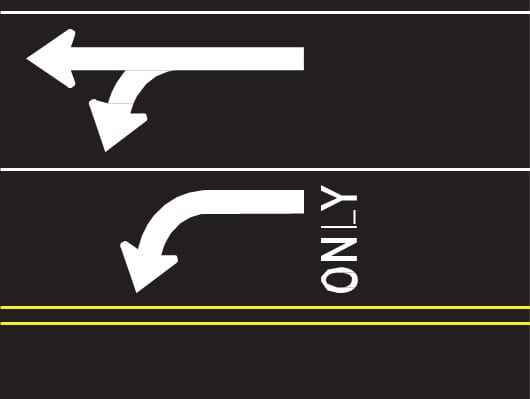 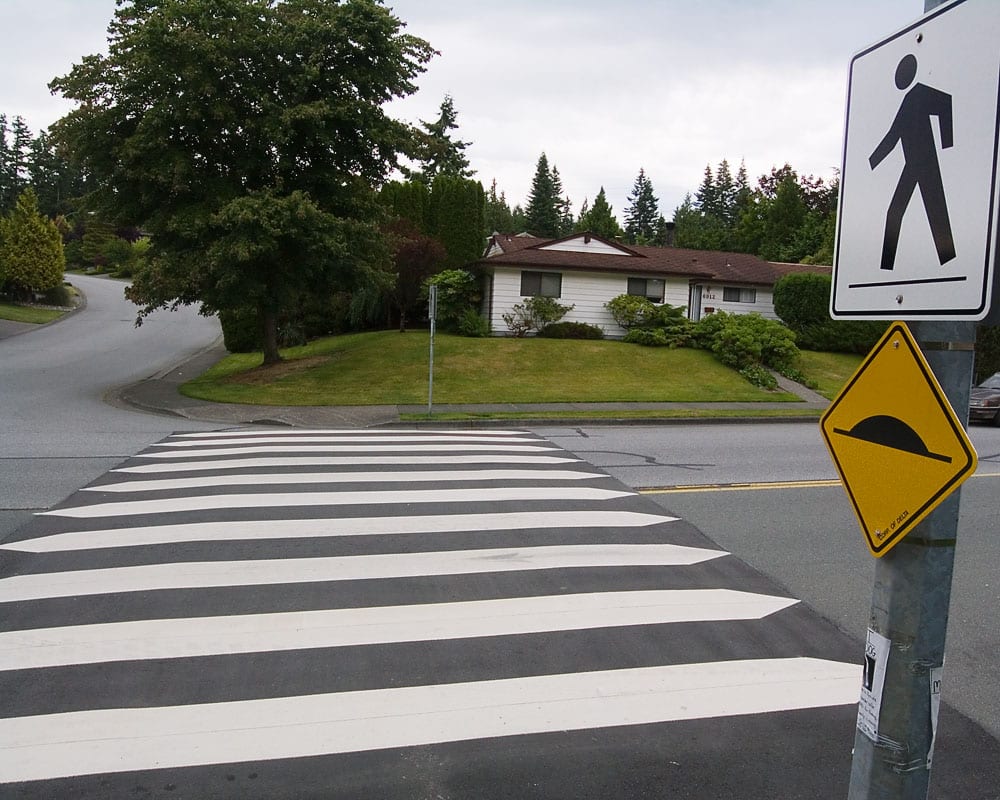 A pedestrian crossing or crosswalk is an area in the roadway that is designated for pedestrians to cross a road. In Nevada, every intersection is considered to be a crosswalk, regardless of whether or not there are pavement markings indicating a crosswalk.

Crosswalks are designed to keep pedestrians together where they can be seen by motorists, and where they can cross most safely across the normal flow of vehicular traffic.

Marked crosswalks are most often found at intersections but they are also found at other places on the roadways in Nevada as well. These places are typically busy areas that have been deemed unsafe to cross if there was no crosswalk present. Normally these areas have designated crosswalks because of a large volume of vehicle traffic in the area, fast speeds, large road width or because there is a large amount of pedestrian traffic in the area, such as near shopping centers or schools.

When driving, you should keep in mind that some crosswalks are controlled by lighted signals while others are not. Again, you should also know that just because there is not a clearly marked crosswalk, that doesn’t mean that the area prohibits pedestrian crossing. The fact is, all intersections in Nevada are considered to be crosswalks whether there are pavement markings or not! 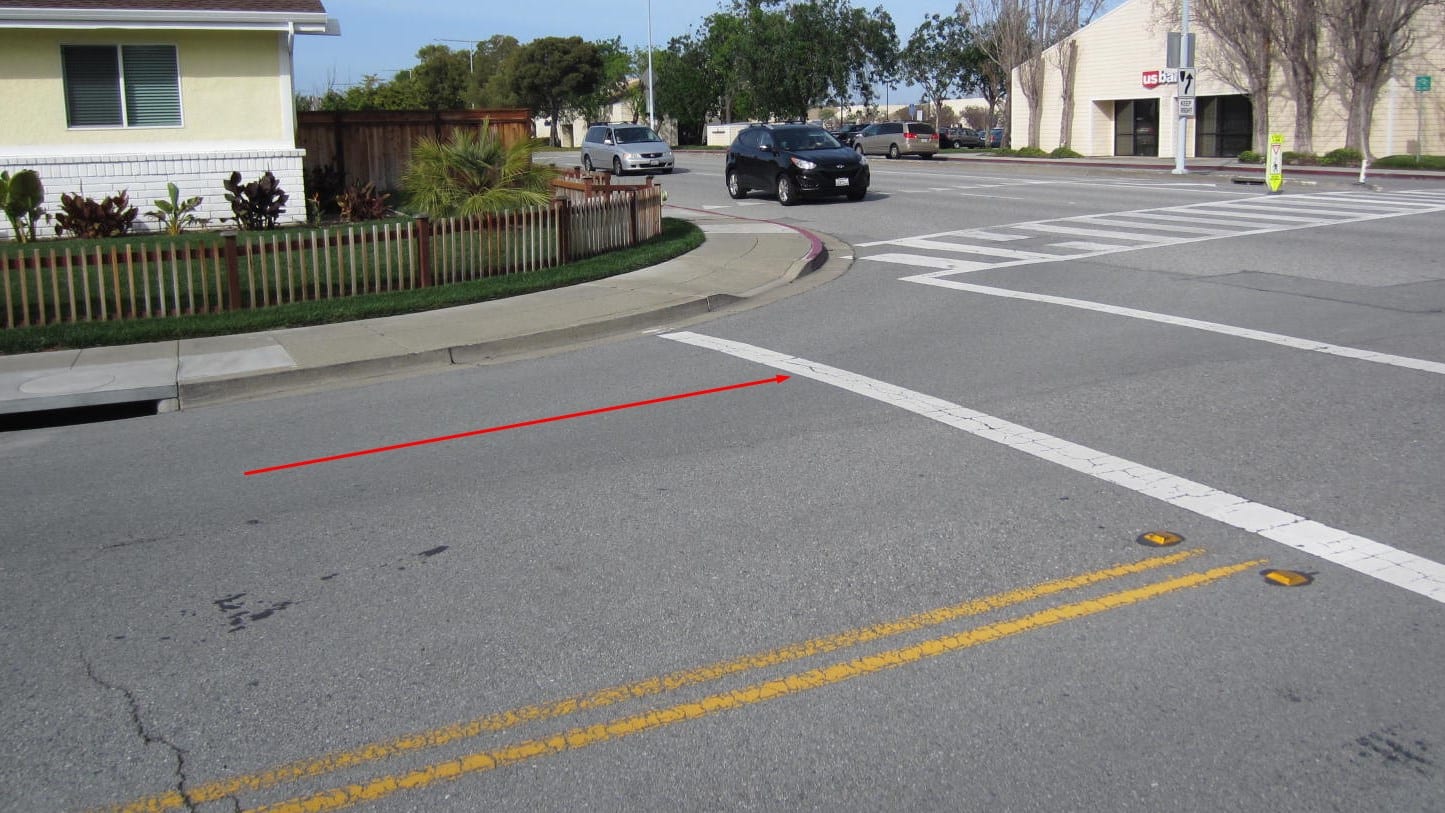 At intersections controlled by a stop sign, yield sign or traffic light, there may be a white solid line on the pavement prior to the intersection. When you are required to stop in these areas, you must stop your vehicle before reaching the stop line (not on top of it).

Lane symbols are used to designate special lanes for certain vehicles. These include HOV lanes and bicycle lanes. These lane symbols and the lanes themselves are white in color. 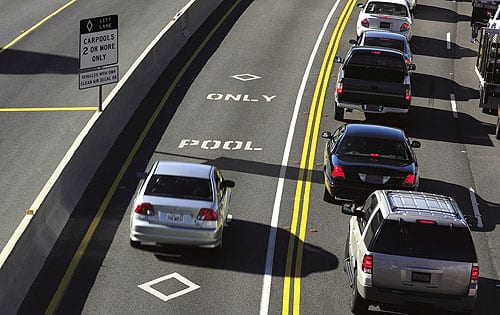 HOV lanes are designated by a large diamond shape. Your vehicle is not allowed to be operated in such lanes unless it meets the lane requirements. In the case of HOV lanes, this pertains to how many occupants you must have inside your vehicle. 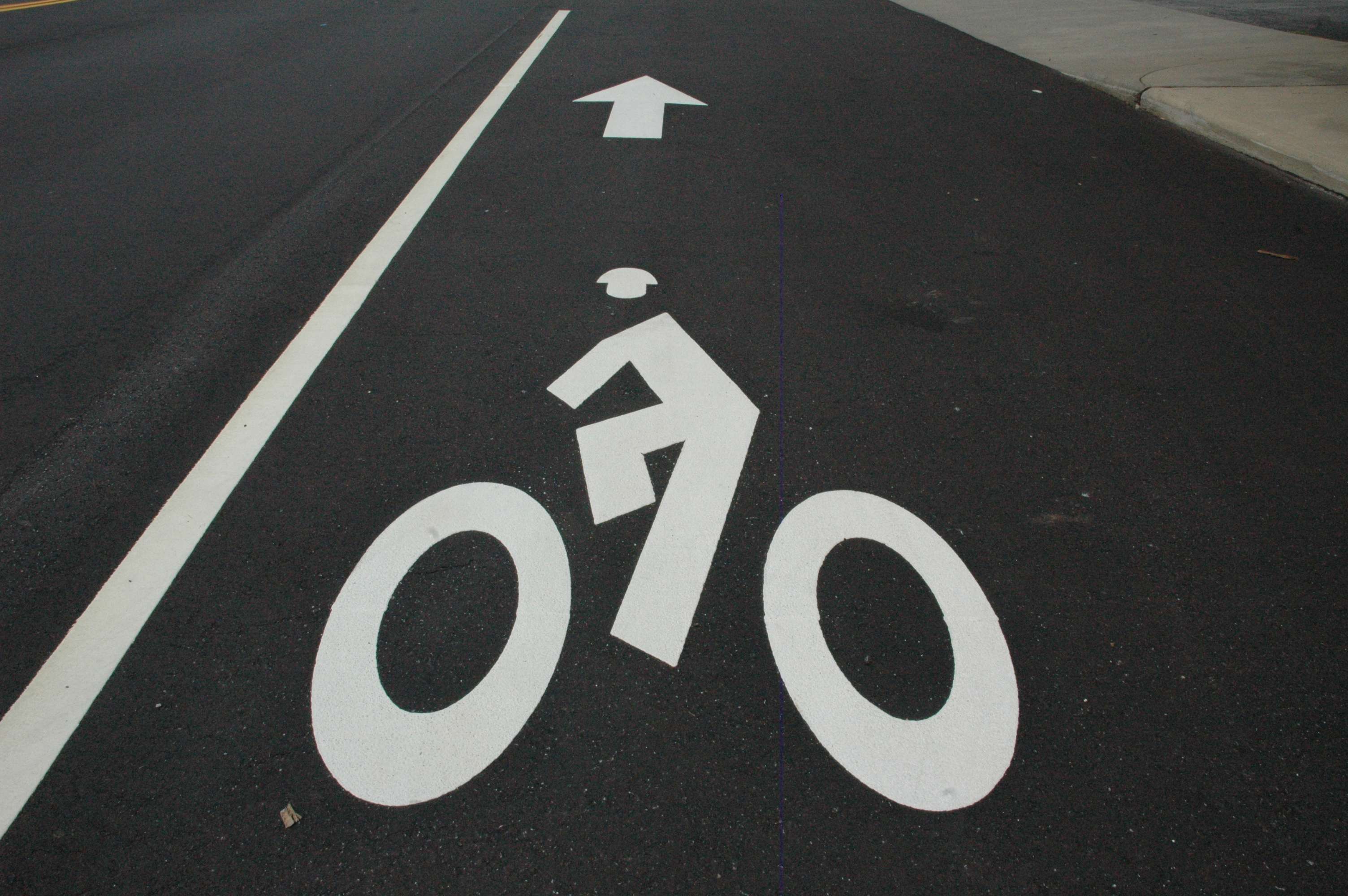 Bicycle Lanes are designated by a bicycle symbol. These lanes are reserved for those riding bicycles. Vehicle traffic should not enter the bicycle lane unless it is doing so is required when making a turn.

When you see arrow markings on the pavement, this tells you that you must make a certain movement when operating your vehicle in that particular lane. These are white in color and usually will inform you to continue straight or make a left or right turn.

Almost every parking lot, be it public or private, will have designated parking spaces for those with physical disabilities. These parking spaces are typically designated by a symbol of a wheel chair in white markings with a blue colored background.

Plates and placards must be used only by the person to whom they were issued.  You may not use someone else’s privilege.  DMV issues authorization letters that must be stored in the vehicle if it is equipped with handicapped plates, or carried by the person who has been issued the placard. The minimum fine for parking illegally in a handicapped space is $250.

Curb markings let you know whether you are allowed to park in a certain area. However, there are many more places where signs indicate that parking is not permitted – and it’s a good idea to pay close attention. Parking tickets can be costly, and recovering your car after it’s been towed is often very expensive. Always check for signs that prohibit or limit parking.

Below we describe the situations in which is it always illegal to park your car except when you need to avoid a collision or you are following the instructions of law enforcement:

There are numerous colors and numerous shapes of traffic signs. Each shape and each color has an exact meaning, so you must ac­quaint yourself with all of them. As with curb markings, color is an important communicator of information when it comes to road signs, but shape is equally important.  That’s because in poor driving conditions, such as fog, sometimes the only part of the road sign you may be able to see is its shape. Traffic signs also have “legends,” which are key words or symbols that communicate specific information. They may require a little more time to interpret, but they are just as important as a sign’s color and shape.

There are three general types of signs that you will find while driving in Nevada:

As a safe and responsible driver, it is crucial to pay close attention to the information you are given via road signs. These traffic signs provide you with the information you need to drive safely on any particular roadway. Traffic officials used a series of colors and shapes in designing road signs so that drivers wouldn’t have to stop and read each sign that they saw. These different colors and shapes help make identifying signs easier and faster, especially on the road.

Here are some of the most common colors used on signs, and what those colors generally mean:

As we noted before, a sign’s shape gives drivers important information. These shapes always tell you the following, with only a few exceptions:

Stop Sign: a red, octagonal shaped sign is best known as a stop sign. The literal meaning of this sign means just that – that you must come to a complete stop. A complete stop means your vehicle has stopped completely and is not moving. When you stop at a stop sign, you must remain stopped until you can safely and legally proceed.

Yield Sign: a red and white triangular sign is known as a yield sign. The yield sign tells the driver that they must prepare to stop, if necessary, and let another driver proceed with the right of way. This differs from a stop sign in that you are permitted to look ahead and stop if necessary. 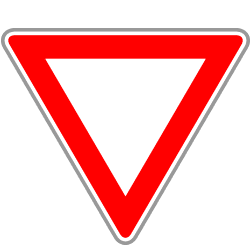 Speed Limit: Speed limit signs are designated as white colored signs with black writing, containing a number, that tell drivers the speed “limit” which is the maximum allowed speed that they can travel on that particular stretch of road.